‘Mickey and Joe’ is a Graduate film set in the 90s, which follows two boys lives growing up. The film features the difficult understanding of men expressing their own emotions and feelings and features how difficult it is even for friends to really understand each other. Two boys set out on a night out at illegal rave to impress Samantha; Mickey’s crush but never end up at the rave and end up spending the night in a car park. That night they find out more about each other than they have ever imagined before leading to some dramatic turn of events.

Laura wanted to create something different for her last film at University and wanted to push herself by setting it in the 90s. She wanted to pick the topic of illegal raves as it was something not really covered in many films and also wanted to raise awareness for Male Mental Health by including a two male leading characters who don’t open up to each other and discuss their problems.

The film was created by Laura Teaton who has recently graduated from Staffordshire University in Film, TV and Radio with a First Class Honours. The film has won a Progress award on her course and is being entered into Film Festivals.

The film was shot in and around Stoke and her crew were all students on her course that included Liam Turnock as the Cinematographer, Roly Parmar as the Camera Assistant, Adam Thompson as the Sound Operator, Fyer-Hunee Sawyer Hartley as the Sound Assistant, Shannon Harvey and Louise Shadbolt as the Set Designer, Jade Willer and Isaac Brady as the Runners and Louisa Lewis as the behind the scenes photographer.

The film featured Angelo Dellicompagni as Mickey, Robson Healy as Joe, Sophie Montague as Samantha, Diane Collings as Mam, Beatrice Bowery-Taylor as Jessica, Daine Brown as Steve and Ben Gooding as the Voice-over.

Laura is currently working as Freelancer and if you would like to get in contact with her or check out any of her work here is a link to here facebook page: https://www.facebook.com/LRTFilm/?modal=admin_todo_tour

You can watch Mickey and Joe below :- 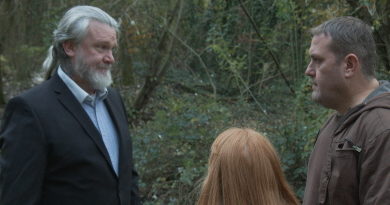