The Environment Agency is urging people to check the latest safety advice as flooding impacts continue with further heavy rain expected to fall on areas already affected by the wet weather later this week.

Today (Tuesday 18 February) there is a heightened flood risk mainly in parts of the Midlands. River levels will remain especially high on the Rivers Wye and Severn, continuing on the lower River Avon until Saturday. Further heavy rain is forecast in the north of England for Wednesday into Thursday and may fall on catchments that have been recently flooded.

River levels have exceeded existing records across the country following Storm Dennis and ongoing, persistent wet weather. There is now a heightened concern at the River Severn after river levels reached their highest on record in Upton on Severn. Our incident teams are working closely with emergency services to keep people safe.

Every home flooded is a tragedy for that family and our hearts go out to all those who have been flooded and continue to feel the impacts of Storm Dennis.

Our teams will continue to work 24/7, alongside the police, fire and rescue, and local authorities, to reduce the risk of flooding and keep communities safe. So far we have protected nearly 25,000 properties from the impacts of Storm Dennis.

We expect further disruptive weather into tomorrow and Thursday, bringing a significant flood risk to the West Midlands, and there are flood warnings in place across much of England. Now is the time to check your own flood risk.

With the effects of climate change, we are seeing more frequent periods of extreme weather. It is important for people to be aware of their flood risk and stay safe by signing up for flood warnings, making a flood plan and remembering not to drive or walk through flood water – it’s not worth the risk.

It has been an exceptionally wet winter so far with autumn rainfall records being broken for South Yorkshire, Nottinghamshire and Lincolnshire. England as a whole had its fifth wettest autumn on record. The flood risk will remain high and the public need to remain vigilant by signing up for our free flood warnings and checking what to do in a flood.

Keep up to date with the latest safety advice, call Floodline on 0345 988 1188 or follow @EnvAgency on Twitter for the latest flood updates. 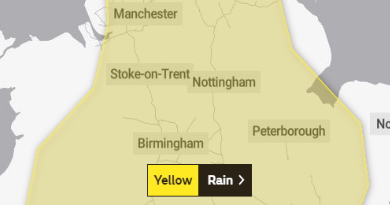 Storm Hannah Is Set To Hit The UK